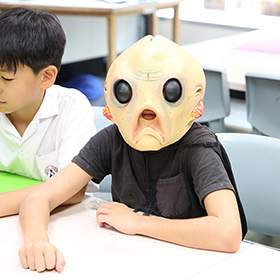 Year 5 recently experienced an ‘out of world’ day. A message was received from another life form but what was this strange creature saying? The students worked in groups to decode the message and then had to decide how they would respond. By creating a universal language made up of actions and sounds, the students tried to communicate with the alien and this prompted them to ask questions about the existence of other life somewhere in the universe and whether or not humans should be exploring space.

After sending a message to the alien, the students were challenged to send a bottle rocket into orbit. Using their knowledge of forces, each class decided upon on the volume of water added to the bottles and then tested their rockets to see which class had the longest flight time. The entire Year group gathered on the Primary Back Field to review the results. What a way to start the new learning theme and our budding Year 5 astronauts are already excitedly asking questions about the final frontier!