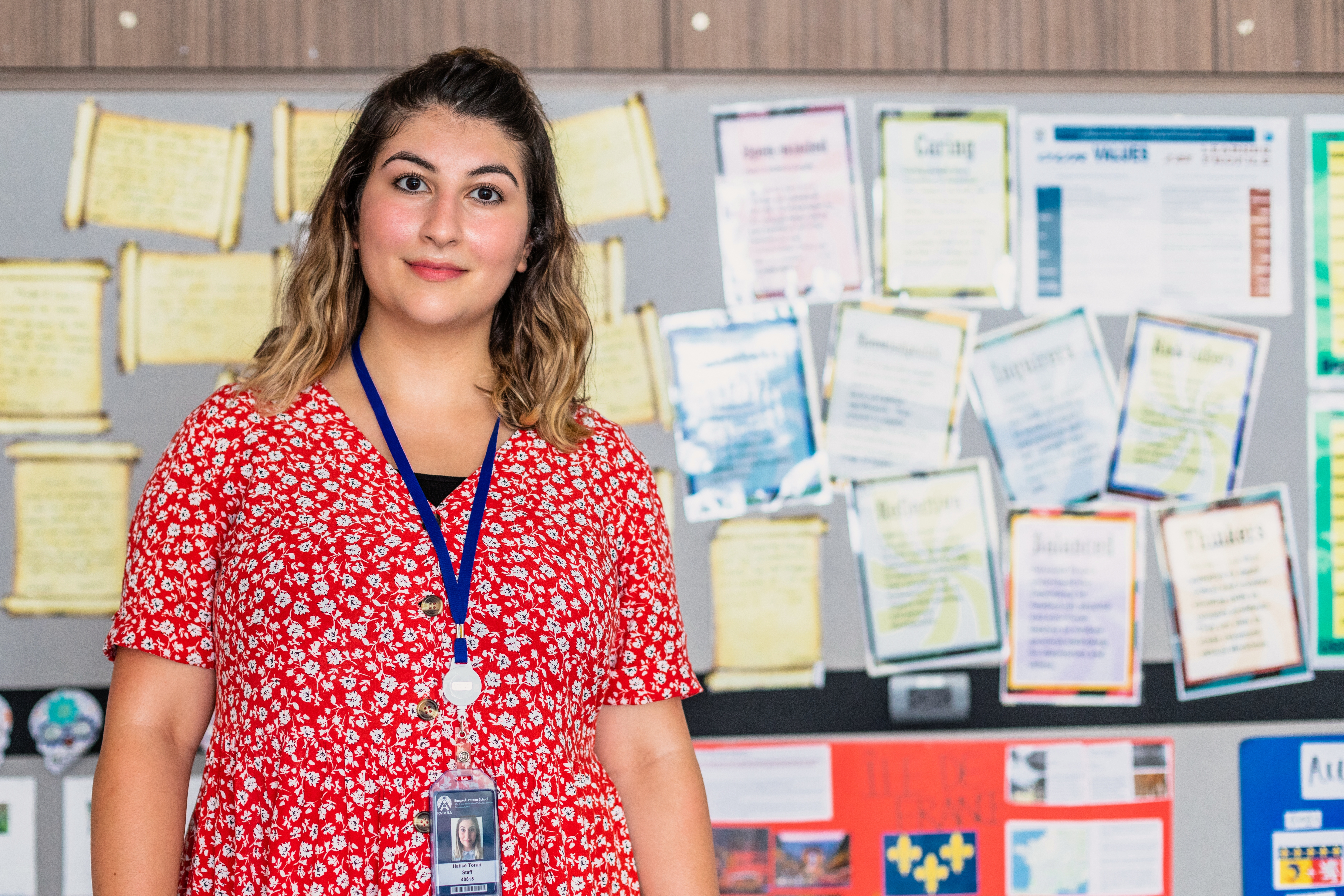 Hatice (pronounced Ha-tee-ja) was born in Istanbul but grew up in Manchester, doing her undergraduate degree in French and German at the University of Manchester as well as her PGCE. She studied abroad in Lyon and Heidelberg for a year during university. She taught at an independent boys’ school before taking her first overseas position at Bangkok Patana School.

“Everyone sees Manchester and thinks, ‘Football!’ However, I am not a football fan – I know the city goes crazy when there are Man U – Man City games – me, I just want to go home. I am a reader, it is my favourite thing to do. I like cooking, I am excited to try some Thai recipes, I love traveling and really want to get to know Bangkok. I do like to on walks or hikes, get outdoors – not sure how that is going to work in this weather, I am not used to the heat.

I’ve always known, my whole life that I wanted to be a teacher. As a kid I used make my siblings play class with me and I would set them homework. I even wrote my sister a report when I was eight. It felt like that is what I was supposed to do. My sister told me when we were little, she asked me to teach her how to ride a bike and I insisted on giving her theory lessons first. When I learned that I liked to use my languages and learn new ones, that is when I knew what I wanted to teach.

I think it is really important that a teacher really wants to be a teacher- it isn’t the kind of thing you have to do, but you do it because you really love it. It is important that a teacher cares about their subject and enjoys spending time with kids. I can wake up and have the worst day but as soon as I walk into a classroom, they just light it up, they make it easier to be a good teacher when they want to be there too.

I was amazed at how enthusiastic and approachable everyone at Bangkok Patana is; it is wonderful to have a Head who is so down to earth. Leading a staff of so many people and make such an effort to get to know everyone. The induction process was great, I felt really looked after, it feels like a family and that they take care of you, everyone is really friendly and welcoming.

Languages are important – it isn’t about basic communication- it’s so much more than that. I want to learn Thai because I love being able to communicate, there is a personality within a language, you develop a personality that goes with that language. Even if they can speak English it is not worth as much as being able to speak their language. When people get older they always say ‘I wish I had bothered to make an effort when I was in school.’ I think it is important that students learn how to communicate in languages other than their own.”