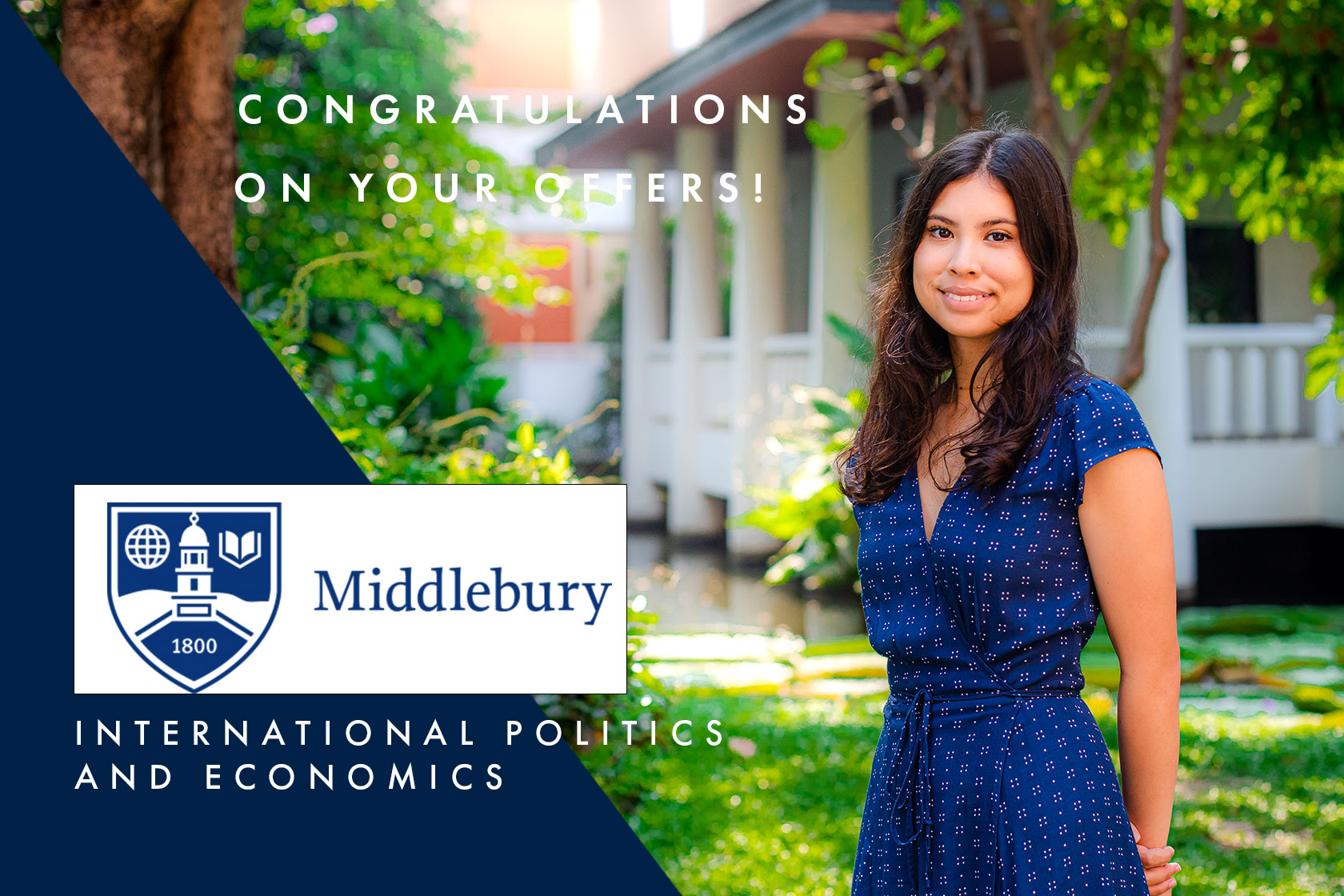 “I am planning to attend Middlebury College. Not only was I captivated by its picturesque campus from my first visit, but Middlebury has strong programmes in environmental and international studies that were of my interest. In fact, Middlebury is home to the first Environmental Studies programme in the US, and the college is also greatly involved in several sustainability practices. Attending Middlebury will allow me to engage in a tight-knit and intellectually stimulating community that truly encompasses a Liberal Arts education. As Middlebury has campuses at 38 Universities in 17 countries around the world, I plan to minor in a foreign language before immersing myself in a new culture through their renowned study abroad programme”

“Although I applied to universities in three different countries, I was especially drawn to the flexibility and the well-rounded nature of the US curriculum. US universities tend to provide students with the opportunity to explore multiple subjects for at least a year before deciding on a major. As someone who is still uncertain about her intended major, the US curriculum seemed the most ideal. “

“I plan on studying International Politics and Economics. I became fascinated with this major due to its interdisciplinary nature that will allow me to explore our increasingly globalised world through multi-ple lenses. Moreover, the courses within the major cover themes ranging from Inequality and Justice to Ecocriticism, all of which directly align with my interests.”

“My extra-curricular activities include singing (both as a soloist and in the school’s Jazz Band), swim-ming, and several community service activities such as Thongbai Daycare.”

“Outside of school, I founded my own project named The Rising Sunflower Project which involves do-nating sunflower kits to local schools in rural communities in hopes that they develop the knowledge and skills to become self-sufficient. Growing the sunflowers sprouts not only helps them maintained a more balanced diet, but also allows them to generate income for themselves by selling the sprouts or sunflower seeds. I have also taken part in annual community service activities such as teaching English to young monks in the Northern provinces of Thailand, performing to refugees with my student-led band, and teaching blind children to swim at the Bangkok School for the Blind. I am also involved as both an SSRC (Senior Student Council Representative) and a Student Delegate.”