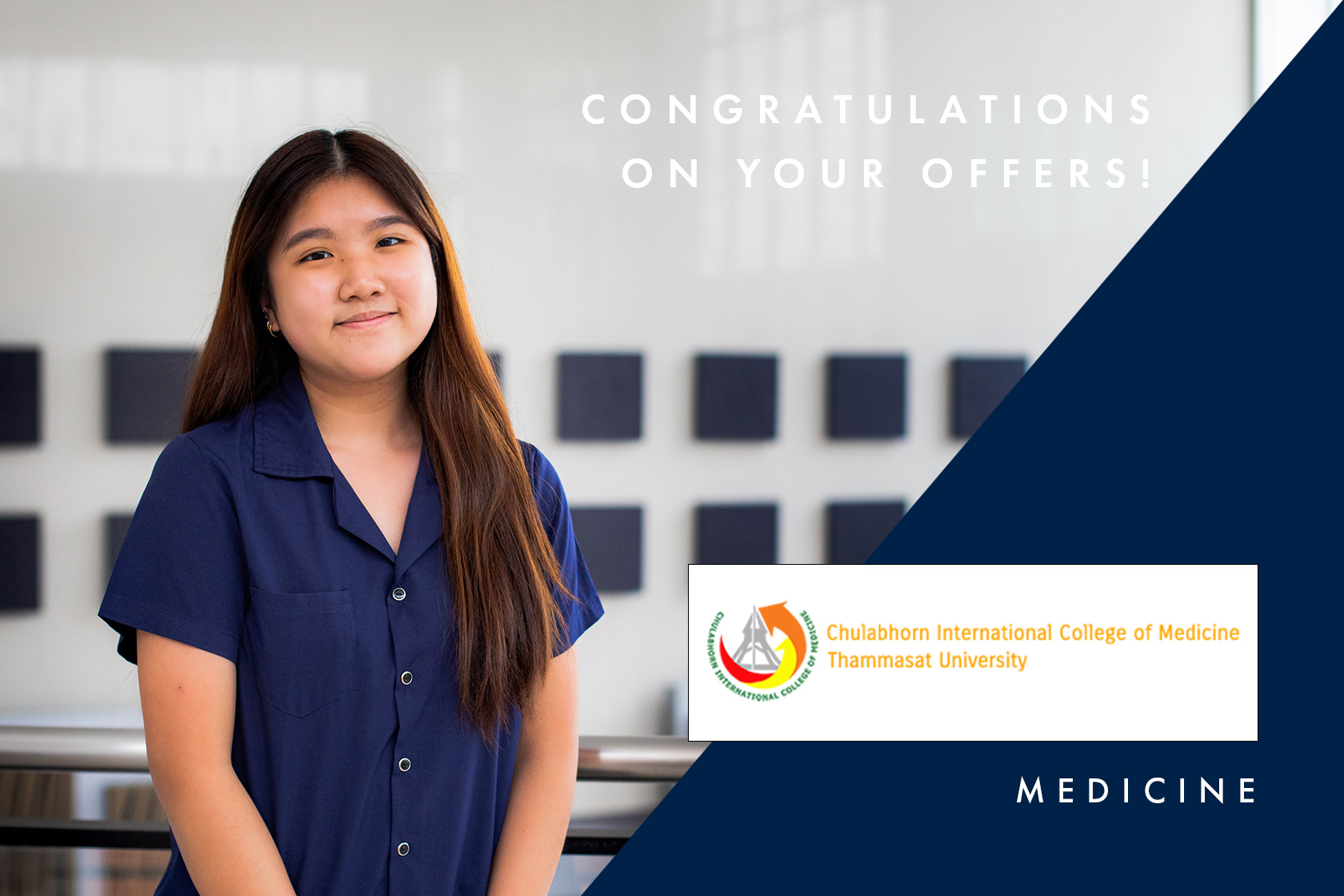 Congratulations to Sarisa (Mill) Tositrakul on her offers from King’s College London, University of Warwick, University of Nottingham, Chulabhorn International College of Medicine (CICM) at Thammasat University and King Mongkut Institute of Technology Ladkrabang. Mill will be attending CICM Thammasat to study Medicine.

“I have decided that I will be attending Chulabhorn International College of Medicine at Thammasat University to study medicine, as I would like to pursue this career path. I came to this decision as I plan to work in Thailand once I graduate, so remaining in Thailand will be very beneficial in terms of getting used to both the learning and the working environment in Thailand, common diseases and treatments specific to the country, as well as getting a medical license in Thailand.”

“Since Thammasart is a relatively larger and well-established university, there are benefits that come with it, such as having their own university hospital, and having connections with many different institutes and establishments in the country as well as overseas. I believe this will allow for more opportunities and will be very beneficial for my career prospects. Given the campus location and the overall environment of the university, I feel that on top of receiving an education, I will also be able to experience the university life as well.”

“I decided to study medicine as I have always been more drawn to the sciences, particularly Chemistry and Biology compared to the other subjects in school. I was exposed to this field starting from a very young age due as I had a weak immune system and frequent hospital visits as a child, so I have always been interested and admired those in the field. Initially, it was merely one of the possible fields I was considering, but after putting myself in the environment to see what it was like, and getting to know more about it by shadowing doctors and doing related volunteer work, I became even more drawn to it and realised how much I enjoyed it.”

“In school I was part of Operation Smile where I was able to take part in the mission trip, and I was also one of the board members of CubeCare. I was also involved in starting up and running an ECA called Little Einsteins. I was also involved in organising a project involving an international school for kids with special needs. I was also part of the school’s JV badminton team where I was captain, and also played piano, receiving an award at the Trinity Awards Thailand in 2016. Outside of school I have had work experience and opportunities to shadow doctors at many different hospitals and have regularly volunteered at the Young Buddhist Association of Thailand.”