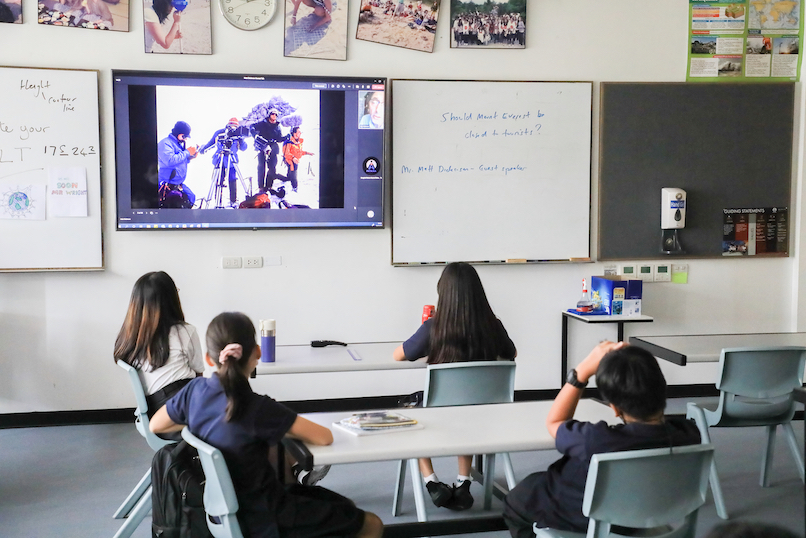 Students in Year 7 were inspired by their virtual meeting with filmmaker Matt Dickinson who spoke about his harrowing trek up Mt. Everest during one of its most fatal storms, in 1996. His film, The Death Zone: Climbing Mount Everest, was filmed during that storm. He joined professional climber Alan Hinke where they battled gale-force winds and treacherous conditions. Students were interested to learn that there were so many climbers attempting the summit at one time, and that it was so dangerous. Mount Everest is one of 14 mountains over 8,000m and is the most climbed out of them. Students learned about the environmental issues plaguing this highest peak, from trash left behind by climbers to overcrowding as more and more climbers attempt to summit.

Matt Dickinson has filmed extensively with National Geographic TV, Discovery Channel and the BBC. He has filmed on Everest’s summit (the first British filmmaker to do so and get back alive), in Antarctica, Greenland, Alaska, the Sahara Desert and on top of the highest live volcano in the world! Students were enthralled by his adventures and had many questions to ask. After, they discussed concerns raised during the talk, including the effects of climate change and overpopulation.

This is the third visit from Matt Dickinson, read about his previous visits both in person and virtually.